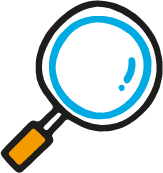 Colorectal cancer is an insidious silent killer in Slovenia, since more than 1,400 people develop this kind of cancer every year and it kills around 700 of them each year.

Many people are not even aware of the colorectal cancer in its early stages because its symptoms are not developed for a long time.

The risk of developing colorectal cancer increases after the age of 50, but it can also affect younger people.

Colorectal cancer usually develops from precancerous growths in the lining of the bowel; called the polyps. If such polyps are found and removed in time, this type of cancer can be prevented. If the growths are found early enough, the treatment can be highly successful, and the patient can further enjoy the quality of life.

A person can have colorectal cancer for several years before developing serious health problems, but this is when successful treatment may no longer be possible. The Svit Programme enables early detection of this type of cancer even in people without any obvious health problems.

We use cookies to ensure that we give you the best experience on our website. If you continue to use this site we will assume that you are happy with it.OkNo
Revoke cookies